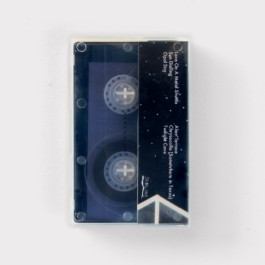 After meeting Camilla and Jessa from Future Shuttle in NYC and playing some shows together during the fall of 2010 we determinedly decided to hook up again someday. The first result is this wonderful cassette by the Brooklyn based trio.

Their improvised sets we witnessed those days contained barely there melodies where the additional clarinet tones from Lizzy Harper were winding it's way through the thick clouds of sustained synth-stardust. As their name suggest they were on a journey through outer space sometimes moving ahead but mostly floating around aimlessly.

On this cassette they seem to have landed on a foreign planet. During the six shorter pieces, with their trademark blend of otherworldly synth textures and playful naïve melodies, they are exploring an exotic world, an unknown paradise if you will. Marveling at vast landscapes but also zooming in on the smallest of unknown flora and fauna and at some point even adding drums to channel their voyage. The wonderful 'Opal Star' seems to be their center of the galaxy on this tape. It’s a fantastic trip with a lot of new territory to be discovered during each listen.